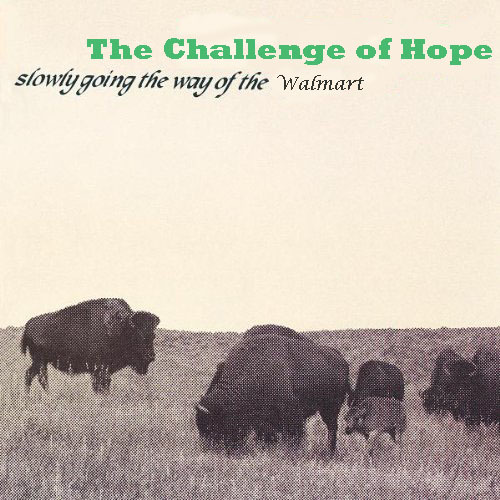 The Challenge of Hope

Part I: Slowly Going the Way of the Walmart

My family moved to a new development in the suburbs of Seattle in the late 80’s. As a 4-year-old, I was excited by the move. The neighborhood our house was in had pockets of forest all around, tractors and bulldozers moving piles of dirt to-and-fro, and, just a few blocks away, there was a farm. It wasn’t a normal farm. There was no corn, wheat, or cows. The farm was a buffalo farm (bison, to be technically correct). My new neighbors were buffalo.

Over the next 14 years that I lived in that house, the neighborhood lost some magic. The tractors and bulldozers were gone by the time I reached the age of independent trick-or-treating. The woods I built forts in after wind-storms were transformed into newer and shinier developments. And the buffalo farm became a beefalo farm (bison-cow hybrids with whiteheads), then an empty lot, and then a proposed new site for a Walmart. These progressive changes were devastating.

For more than a few centuries, folks in the “West” had a general belief-in and sense-of progress. My cultural ancestors saw the world as improving. There was evidence supporting this perspective: vaccines and fancy civil engineering did a good job at limiting the chaotic lameness of disease and floods. Modern economics (with some help from colonization and exploitation) made it possible for middle-class families like my own to buy a house with guest bedrooms and garages for extra stuff or cars. A white fella in North American suburbs could look around at the here-and-now and see things as getting better.

That sense optimism, seeing the world as a place where things are improving, has become harder to maintain in recent years. My own generation is having a tough time buying houses, and living the suburban dream many of us were brought up in. Climate change has created a precarious world where all special places are disappearing or threatened. We’ve watched the spots that were special to us disappear, and now we see that narrative playing out globally.

The same sense of loss I grew up with has been transposed on my outlook on the world. Hope and wonder have slowly transformed into despair and malaise: first the buffalo became beefalo, then the beefalo became an empty lot, now we wait for the Walmart. All will become walmart: resistance is futile.

I think that feeling that the Walmarts of the world will swallow up all that we love is particularly present amongst us Grandviewers. Even if we don’t subscribe to suburban happily ever-afters, we social-justice minded urbanite christians find ourselves in the same pessimistic predicament as our suburban brothers and sisters. For Grandviewers, gentrification, climate change and the opioid crisis feel like an unstoppable torrent eroding our hope. Losing hope presents challenges for living-out the Jesus way in whatever neighborhood we find ourselves.

When my family first moved to our new neighborhood, I would nag, like only 4-year-olds can, to drive by the buffalo farm. Even just saying “buffalo farm” was like uttering sacred words of institution: words that made present a sense of wonder and awe. I loved that farm. We would drive by it on the way to church, and my love of church is probably, in part, contingent on the small herd of bison that lived on 136th street just outside of Everett Washington in the 1980’s and early 90’s. But when that herd slowly became beefalo, I nagged less. I slept more on the way to church. When the herd disappeared, I avoided that street.

The old buffalo farm had been desecrated: made un-special. Seeing it was a reminder that things were getting worse. Loss of hope has a side-effect: withdrawal. As the world around us is progressively desecrated, we avoid the people and places that remind us of the loss of special-ness, and subsequent loss of hope. We numb or busy ourselves to avoid thinking about the cause of our malaise and despair. Disenchantment with the nouns that once were sources of wonder and hope leads us to spirals of critical and sardonic deconstruction.

I believe the erosion of hope and wonder slides down to cynicism and withdrawal. This is a predicament that the church has to address: the good news must be proclaimed in all of those desecrated places. The good news has to be good for the stories where we’ve lost hope. As Christians bearing witness to the good news that Jesus is making all things new, we need to be hopeful people. We need to be present in the dark places of this world.

If bumper stickers are reliable evidence, Christians are already present in the descretated plains of Walmart parking lots.