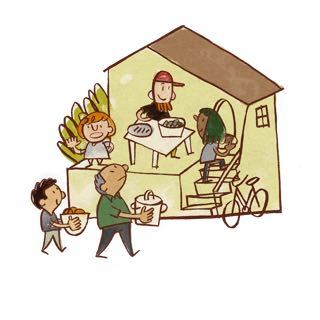 Living in Vancouver for the past 33 years, I have witnessed a steady shift towards secularism and fragmented approaches to life[i]. While church attendance has decreased during those three decades[ii], the conditions of belief have also changed, as Charles Taylor has so well argued in his book, A Secular Age.[iii] Not only do many people live within what Taylor calls an “immanent frame” (a social imaginary without God as an active agent), this secularism has been shaped or more often misshaped by forces of autonomy and individualism,[iv] consumerism,[v] and economic inequality.[vi]

Within this challenging milieu, some churches have “given up”. In the face of these powerful forces and the concomitant and pervasive marketing that promotes them, I feel that temptation myself at times. Other churches have been able to survive or even thrive by what I would call by and large “giving in” to these powerful misshaping forces. Across North America, we have ended up creating plenty of churches that ask no more than 2 hours on a Sunday and a small portion of a person’s income in exchange for an entertaining style of worship that appeals to consumerist and autonomous impulses, but fails to call people to a sacrificial pursuit of and participation in God’s kingdom of peace and justice. I offer this critique very aware that I also feel tempted to default to this response, to a kind of leadership that “gives in” to these forces that misshape how we do church.

The Biblical vision of “laying down our lives” for the king and seeking first God’s kingdom of restoration and reconciliation calls us to develop a very different kind of community, neither one that “gives up” or “gives in” to these forces. The starting point for this alternative response is this reality that Jesus is the king, victorious over these powers, the One who is now redeeming these powers for the kingdom come and coming.

For the past 29 years, I have had the privilege of being a pastor as part of Grandview Church in East Vancouver that has searched for this alternative path. In that time, we have sought to live into a vision of God’s kingdom that counters these misshaping forces and bears witness to God’s renewing action in Christ through the Spirit. The desire to bear witness to God’s restoring and reconciling kingdom has led us down at least 4 trajectories towards fostering a diverse community, a more radical hospitality, justice for the least and confession have both shaped our way of life personally and corporately.[vii]

Seeking the kingdom in this context has  also led us to develop a number of initiatives and organizations including a free community meal, housing and support for refugee claimants, many community houses and a social housing complex, social enterprises (including catering, pottery and renovations business out of the church building), a policy-developing organization around issues of human trafficking and the sextrade, an initiative to help churches implement recommendations from the truth and reconciliation commission, a support group  for single moms, a social justice activist group and an urban prayer and retreat space. All of these have grown organically out of the intersection of God’s vision for the kingdom, the gifts and passions of our church folk and the needs of our neighborhood and city. And while we are a church of only 300 or so people with two congregations, we have and are developing a way of life in Christ and the power of the Spirit that continues to transform and sustain us and these initiatives.

That way of life has been shaped by a holistic theological vision. While at seminary, I had the privilege of taking two courses with N.T. Wright. His courses on the kingdom of God in the gospels and how that kingdom vision was worked out in Paul’s letter to the Romans grew my imagination for the kingdom of God. While I didn’t know how that vision could be worked out in a secular, post-Christian neighborhood, I did come with a vision of a church incarnated in a place seeking to participate in God’s mission of making all things new. This hermeneutic that Tom articulated for working out the way of the kingdom – as Jesus to Israel, so the church to the world – became a lens through which to see how we could bear witness to the kingdom come in our neighborhood. In a North American culture where pragmatism and “getting bigger” can become idols, I believe that having this broad and biblical theological vision of the mission of the church is vital for renewing church life today.

The first 10 years of this journey were about re-forming a community that had decided to quit but who were willing to give it one last shot to see what could happen. When I first came to Grandview church, people’s experience of a shared life was self-admittedly very thin.  Moving into the neighborhood (which made us three of only a handful of people who lived there), my wife Mary and I  began a parent’s group, in part motivated by our desire to make some friends of our own age group to compliment our friends with the seniors in our church.  We also made connections with refugee agencies and began connecting first with Latin American refugees and then folks from many parts of the world. These initial forays into relationships with our neighbors, especially the poor and vulnerable,  had a boomerang effect of renewing and reforming our shared life as a church.  To become a welcoming community involved plenty of grieving of the past, learning to trust and love one another, discussions and disagreements about how God was leading us, and movements towards hospitality with the stranger.

This move towards hospitality was one of the key moves we made that led to renewal.. For a good number of folks, this included living next door to each other or within the same household.   Our own family “fell into” this way of shared living as we welcomed folks to live with us for a weekend or week that morphed into a couple of years living together. Eventually we and other folks embraced this deeper shared life in a community as one of the ways in which we can form a community which is empower to bear witness to God’s kingdom.  We now have over 16 houses were people live together as well as a new housing project which just opened that features a “shared living room” among every 5 suites as well as a floor of common space. Community living is not a magic bullet to church renewal or transformation but a deeper shared life is crucial to forming a community that resists the misshaping powers so that we might be transformed by Christ.[viii]

That renewal is more likely if these communities inhabit a place. If we are to overcome the autonomy and fragmentation of contemporary life and contribute to the well-being of places in line with the kingdom’s promise of restoration, and if we are to live into this vision of restoration that extends to public buildings, trees, sidewalks as well as people, we need people who commit not only to each other but to a place – and learn to love it. Given that more than ½ of our church family lives within walking distance of the church, we have come to care about this neighborhood  as our home. When you inhabit and embrace a place over the long haul, the shalom Jesus came to inaugurate – this culture in which humans flourish, relationships are restored and creation moves towards completion – become more imaginable.

But it takes time. This phrase  -- Shalom takes time – comes from a book co-authored by Stanley Hauerwas and Jean Vanier.[ix]Our experience has proven this to be true. As we have persisted in understanding our neighbors, power dynamics and institutions in our neighborhood, we have been able to make some headway in addressing systemic issues of injustice. Take housing for example. Not only have we found creative and prophetic ways to bear witness to a different view of property and home by sharing houses, cars, tools, money, or by developing affordable housing over top of our church parking lot,[x]we have also participated in many forums, discussions with politicians, and campaigns such as “raise the rates” to increase social assistance, all in an effort to promote a shift in how we view housing from being a commodity to being a basic need for all. Pursuing the kingdom requires us to move beyond only personal and corporate responses to address these systemic issues of injustice and decay.[xi]  And this takes time, which is one reason we have called many folks to make commitments of stability instead of moving every five years as North Americans are prone to do.[xii]

If we are to stay longer term in pursuit of this wider vision, we will also be confronted with our own idolatries. I once preached a “Tony Campolo” sermon about how we cannot watch movies three evenings a week and seek the kingdom of God, the point being that seeking the kingdom in all these ways will confront our idolatry of entertainment and diversions. Instead, as we take up this costly way of the kingdom for the long haul, we will learn how much we need true solitude and empowering of the Spirit. In our own journey, the practices of confession and forgiveness – practices we foster in our weekly worship, in our pastoral meetings, and in inner healing prayer – have proven to be essential in our own conflicted relationships and in our own transformation. If we are to recover monastic practices of stability, a practice that I believe is a precursor for churches seeking to recover a kingdom vision, we will need to recover these basic formational practices of confession, repentance and forgiveness along the way.

Holding Together That Which Has Been Torn Apart

I believe that living into a kingdom vision is what has led us to hold together elements of the mission of God that are often split apart.  By seeking this vision over the long haul, we have been able to embrace both prayer and justice, personal and systemic transformation, holiness and prophetic witness, evangelism and formation, empowering leadership and relational accountability,  and an emphasis on both our actions and the action of God.  Indeed, it is the recovering of our awareness of the agency and action of the God who is ushering in this alternative kingdom that has given us hope, courage and creativity. The influx of people from many other countries and cultures has challenged the “immanent frame” that so many of us default to in the West and opened us up to see God’s transforming work in our midst. What our collective journey bears witness to is that the kingdom continues to take root today, even in secular Vancouver.

[i] See Alistair McIntyre’s description of our ideological fragmentation in After Virtue, University of Notre Dame Press (3rdedition), 2007.

[viii]  Hauerwas and Willimon’s book, Resident Aliens  (Abingdon Press, Nashville, 1989) helped me understand at that time why we needed to be re-formed in community in Christ if we were going to live out a kingdom vision and be salt and light.

[x] Go to http://salsburycs.ca/   for a description of the co-here project.

[xi] One of my pleas to preachers is to keep all three of these levels of transformation in view in our preaching. Too often, we restrict preaching to personal or perhaps church transformation but don’t get into how God wants to transform society.  Preaching that also addresses the complex systemic issues of our day will have a greater kingdom vision and impact.