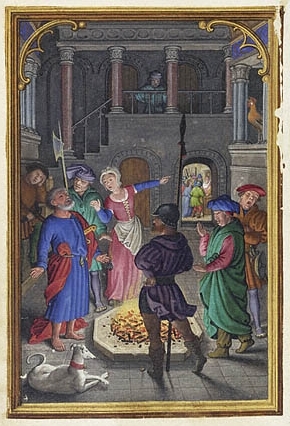 The Challenge of Hope

It’s not one of the frequently listed sins, certainly not up there with lust, greed, envy or pride, but despair, in Christian thinking, is a sin. Like all sin, it requires confession and repentance. I confess that I have despaired in thought, word, and deed; both in what I have done, and what I have left undone.

Confessions aren’t worth much when they are general, so let me be specific. Earlier this year a man named Tom died on my front porch. Tom had lived on that porch off-and-on for years. Tom was a kind and soft-spoken indigenous man. Tom preferred to live outdoors. When I first met Tom 3 and half years ago, I asked my housemates what his story was. The story had many similarities to the ones I’d heard working in shelters in the DTES. It was a story that was a part larger stories of broken systems and the unjust history of colonization.

I met Tom in November. When winter came, Tom would occasionally sleep on our couch or in our guest room, but most nights he slept on the front porch under a damp sleeping bag. When I considered the shape of Tom’s story, I could only see it as a sad story.

My lack of hope for for Tom led me to withdraw; I chose not to engage Tom in conversation regularly, or meaningfully. Occasionally I invited him in for dinner. I bought him cigarettes once. We had a few conversations about the books he read. And once or twice he shared some of his story with me. We usually just exchanged hellos as I came home.

The day Tom died, I noticed that he was lying in an odd position on the porch and as I walked past, I briefly noted that I thought he was breathing, and then kept walking. I told myself “Tom often sleeps in weird positions, best to let him rest.” I’m not sure I could have done anything to change what happened, but I do believe I could have done something. But I didn't, and I believe that was despair.

Instead of being faithful, present, and hopeful, I had cultivated distance and built walls between myself and any story that might make me sad or uncomfortable (hopelessness and selfishness are bosom buddies). I entertained despair: invited it in, and fed it, and in return it let me off the hook. If there was no hope in the situation, what was the point in engaging, in even being present? Despair and sloth also have close ties to--a symbiotic relationship. Self-maintained boundaries and barrier walls kept me from having a relationship with Tom of mutuality; walls that I used to avoid real friendship with Tom; barriers that kept me from checking in on him the day he died.

That afternoon on the sidewalk, as the paramedics left, a few of us held vigil. We lit candles and cried. Two stories from the gospel come through my head when I remember that vigil. There was the time Peter wept after he denied he ever knew Jesus. The other story used-to-cliche saying of Jesus': “Whatever you did for one of the least of these brothers and sisters of mine, you did for me.” One of the frustrating things about grief is that stories and sayings that overtime became cliches and tropes suddenly carry the emotional punch and truth they were originally intended to carry. In avoiding friendship with Tom, I had avoided friendship with Jesus.

Tom’s memorial was at the church. Over a hundred people came. Stories were shared, anecdotes and themes I hadn’t imagined. Tom’s story was sad, but there was also a lot of love and beauty. He was a beloved part of a community I hadn't known. He was funny, smart, and especially kind. My indulgence of pessimism prevented me from seeing the beautiful parts of Tom and his life. Hopefully I'm not coming across as over spiritualizing things, but I believe my lack of hope prevented me from seeing God's image in Tom.

When I despair, I often feel like I am seeing the world clearly, like I'm telling the real story. No sugar-coating: the pessimistic and cynical worldview is the clearest vision available. But that way of seeing the world doesn't have a monopoly on truth--it's a twisted perspective. The lens of despair distorts reality just as much as a lens of unmoored optimism. I believe that hopeless lens keeps me from seeing Jesus at work in the brokenness of the human story. Neither unmoored optimism nor despair are compatible with scripture. Neither lens is faithful to Jesus, who entered into the brokenness of our story, suffered death, and rose again.

Following Jesus into the broken stories of this world means I have to confront my despair: I need to repent. I need to ask God for forgiveness, and the Spirit to give me hope that somehow these sad stories are held in the bigger story of Jesus’ death, resurrection, and making all things new. Christian hope is anchored in a gruesome and beautiful story, a human and divine story. And hope is central to following Jesus: I need hope to be faithful to Jesus; I need it to be present in the broken places of the world. I need hope to see Jesus already present in those stories. I need hope to receive the gift of friendship with people like Tom McGregor.